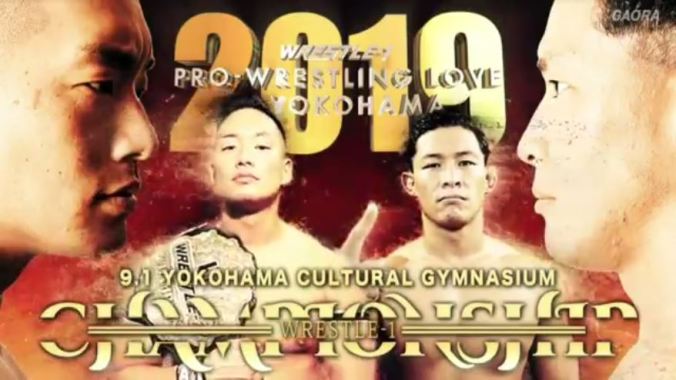 So I’ve really fallen behind on Japanese wrestling, these past few months including Wrestle-1, but I definitely knew I wanted to watch and review this show at least, since it’s one of their biggest of the year. So let’s see how it went, as Inaba challenges T-Hawk for the W-1 Title in the main event.

Solid opener. Very back and forth with the action flowing nicely. Ito was a great little addition to this match too, utilizing that MMA background to pull out some nice countering and submission attempts. In the end though Tanaka catches Baba with the Harai Goshi to win.
Winner: Tanaka/Hijikata/Chikano (via Harai Goshi) ***

– After the match Ito almost starts a fight with Tanaka. And Kenshin and Baba have a very awkward scuffle and I have no clue what they were supposed to be doing.

Another solid match-up. Yoshioka and Onizuka get a tiny bit of control but it’s mostly competitive. Don’t think I’ve seen Onizuka before but he doesn’t seem bad, nothing stand out about him, but he worked well enough.
Tonsho and Yoshioka had some decent little exchnages too and are the two legal men at the end, where Tonsho gets Yoshioka in a Japanese rolling leg clutch hold to get the pinfall.
Winners: Tonshi/Honda (via Japanese rolling leg hold) ***

This was a decent. They do a few minor three man spots and a couple comedic bits, things then get a bit chaotic towards the end , with Alejandro rolling up MAZADA after SUSHI accidentally kicks him in the face, to get the victory.
Not a whole lot to the match, but still fun nonetheless.
Winners: Kono/Alejandro (via schoolboy) **3/4

Good match. One that is very chair heavy.  From the get go there’s a chair duel that Koji wins, smashing Kuma over the head and making him bleed. From there there’s quite a few fun chair spots thrown in and even a bit where they’re just going back and forth smashing chairs over each other’s head, which I’m sure is gonna drive some people up the wall. There’s also a couple table bumps too, the second one being the finish where Koji bombs Kuma through one to get the win.
It’s a little slow in places, but quite enjoyable overall.
Winner: Koji Doi (via powerbomb) ***1/2

Really solid match. Has a bit of a flashy opening and then Andy manages to take control, where we see a bit more of an aggressive side from him as he targets Pantera’s head and neck. It has quite an effecton Pantera who struggles to make a come back, until he turns things around with a sunset bomb off the apron.
From there we get some good back and forth until Pantera  gets a couple of successive nearfalls with big moves and then busts out a Styles Clash to finally win the Cruiser title for the first time.
Winner: Pantera (via Styles Clash) ***1/2

It was originally supposed to be Rene Dupree on Taru’s team but instead, it became a mystery partner called x, who turns out to be Shuji Kondo, making it a little Voodoo Murders reunion.
Match itself is alright, not a whole lot to it really. Taru tries to present flowers to Keiji at the start, but of course, it’s ploy and he attacks him with them instead. Taru’s team then end up taking control of Kaz and take out Pegaso.
Their control is a dull in places, but the hot tag is soon made to Mutoh and just as he’s startimg to struggle, Pegaso comes back to help and it all leads to Mutoh hitting a shining wizard to win. Pretty basic stuff, but not bad for what it was.
Happy 35th anniversary Mr. Mutoh!
Winner: Mutoh (via shining wizard) **1/2

This was great. At the start both teams are going back and forth fighting for control until Lindaman and Irie completely take it, and do a good job isolating Kodama.
Eventually the match becomes more even again and we get  alot of good exchanges and actions on the go, though it seems that Lindaman and Irie still manage to have the advantage a fair few times, working terrifically as a team.
At one point Irie and Lindaman take out Ashino’s arm and that then plays a significant part in the rest of match with Ashino selling it well and the pain having an effect on him at certain points, as well as Lindaman going for the armbar, which gives us cuple nice little submission struggles.
It also factors into the lovely little finish, where Ashino has Lindaman locked in the ankle lock and Lindaman keeps failing to counter and escape.
It however, reaches a point where the pain causes Ashino to lose grasp with his injured arm, giving Lindaman the opportunity to escape, however before he can manage it, Kodama comes off top down on his back with a Mad Splash, taking him out and allowing Ashino to grapevine the leg and put the anklelock back in, which makes Lindaman quickly tap out, so Ashino and Kodama successfully retain. Awesome stuff, loved the finish and really enjoyed the match too.
Winner: Ashino/Kodama (via anklelock) ****

Really good main event. Very back and forth for a good bit to begin, with some nice exchanges, including some matwork on the go. T-Hawk then gives Inaba a piledriver on the entrance stage and takes control, continuing to somewhat focus on the head and neck, as well as throw out some chops.  He manages to cut off Inaba’s comeback attempts at first, but then Inaba manages to hit a fisherman buster to turn things around.
From there it’s some more good back and forth, with Inaba really fighting for his life and showing great resilience, kicking out of the BT Bomb and Nightrider. At the end then he manages lock in the Manjigatame and really wrenches it in, to make T-Hawk tap out and become W-1 Champion for the first time.
Nothing particularly stand out or epic about the match, but still very enjoyable and very solid work from both overall.
I’m actually surprised by Inaba’s push, He’s a solid wrestler, but I didn’t see him as main event talent quite yet. Having said that,  this was a very good and deserving performance by him and I look forward to seeing how he does in his title run.
Winner: Inaba (via Manjigatame) ***3/4

Pretty good show overall I’d say, tag title match was definitely the MOTN and worth checking out and I’d say the main event is worth a ganders too. Rest of it was still solid and made for quite an easy watch though, and sometimes that’s all you need.